Communicating in any written form or language is difficult for me; it is like asking a poet to interpret her words in dance form.

I began my life by the mysterious yet picturesque lake of Inverness in the Highlands of Scotland.

When I was 3-years-old, we went to live in Sudan for four years. In and near Khartoum in various locations, we stayed six months in the winter with my parents. My family life had been full of drama. My parents were flamboyant, extraverted, part of the intelligencia and both very creative. They were the centre of all social gatherings (at times). My mother had a radiant beauty and all adored her, yet she was an outsider from the British establishment. She was a German Jew who escaped the Holocaust as a young child. My Father, a very complex personality, was unstable at times because of his own difficult upbringing. I witnessed his rage.

There are many vivid memories of vast blue skies against moving sands. Sleeping on the roof as night closes in; thousands of stars gleaming in the dark sky. The wide expanse of the Nile ‘The Mother of all men’. The dramatic sandstorms that absorbed all air we breathed, all space surrounding us. The stillness after the rampage, the fine sand settled in all possible spaces and, afterwards, birdsong.

I was an outsider: the only white girl in a Sudanese school and none of my classmates spoke English. Yet, the babble of children was full of laughter; they were kind and delighted in interacting with me, playing games. They were studious and thirsty for knowledge. I witnessed poverty and discrimination. I experienced the shallowness of this elite world in the British Colonial Club in Khartoum. I saw a young child my age begging; I wanted to give her all.

I had Malaria. I remember the first day I felt well, reborn, lying on the grass, smelling the splendour, immersing all my senses and reacting to the vibrant energy of nature that surrounded me in abundance, that renewed my life.

We lived in England during those summer months, each time in a different place with my mother. Always organised by my Father.

Later, we were at our happiest in Devon for two years. I was given the freedom to roam the beautiful countryside at will. For one summer, Gypsies lived in a field nearby. Their children, whom I clearly loved, were wild with joy and merriment. Yet I understood they had a deeper understanding of those moments in time of land and sky.

As a young teenager, I arrived in Israel. Then my mother died. I discovered that I was in a place establishing a new country in the aftermath of the Second World War. We were very disorientated. Eventually, I lived in a flat with my sisters in the middle of Tel Aviv near an aunt. I went to an amazing specialist art school. I blossomed and loved every moment. I was taught by teachers (Holocaust survivors) who were devoted to sharing their knowledge of the arts with the children.

Slowly, one by one, my sisters returned to England. I returned to England as well, where I continue to live, after studying art and design at Bezalel Academy of Arts, specialising in animation. At the time, there was little work in Israel.

In reaction to the turmoil of my life, I learned to observe and respond to the interaction of people who surrounded me, to the relationship of human beings to their environment. As an outsider, I felt the sensuous and poetic beauty of nature.

I realise I shall always observe and work as an intuitive artist who is responding more and more to global issues such as the environment, stress within our different social groups, global communications and how tradition has evolved into commercialism.

My life is like a mosaic, made of little fragments of memories, traditions and family histories. I am part of nature that time passes through and will soon disappear.

Yet despite all, my heart sings in a quiet whisper.

Ann has had a distinguished creative career, running a successful animation studio through which she won many awards for her work, culminating in two golds at the New York Film Festival. One of her sculptures has been displayed in the foyer of London’s Victoria & Albert Museum and she has shown her work in many exhibitions over the years. Her work is currently represented by and for sale on Singulart and SaatchiArt.com. 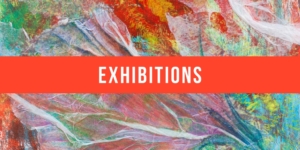